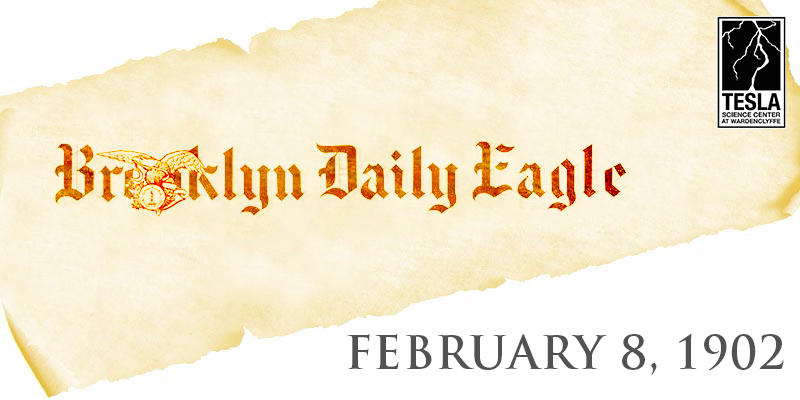 As published in Brooklyn Daily Eagle on February 9, 1902

Buildings at Wardenclyffe to be Used in Developing His Electrical Discoveries

(Special to the Eagle)

Wardenclyffe, L. I., February 8 – Work on the buildings at Wardenclyffe, L. I. to be used by Electrician Tesla in the development of his electrical discoveries, is progressing rapidly. The power house is completed and the foundations of the big tower have been laid.

The working room, or tower, which will be the foundation for Mr. Tesla’s across-the-world flashes, will be octagonal in shape and will be 210 feet high, 100 feet In diameter at the base, narrowing down to 80 feet in diameter at the top. It will be constructed chiefly of wood, though the builders say that fifty tons of iron and steel and 50,000 bolts of various sizes are used in Its construction.

Inside the big tower a well 120 feet deep has been sunk, the well being 12 feet square, cased Its entire depth with 8 inch timbers, which will be finished off with brick and cement. A staircase, which will lead down into the well, is nearly completed.

Transversely across the bottom of the well will be a series of four tunnels, each to be 100 feet long, and a force of workmen has begun work on these subterranean passages.

The power house is constructed of pressed brick, and is 100 feet square. In it are a boiler room, engine and dynamo room, machine shop and laboratory. The Westinghouse Company furnished the electrical equipment, boilers, engines and dynamos. Only the finishing touches are needed on the electrical equipment to make it available and Mr. Tesla promises to begin active operations very soon.