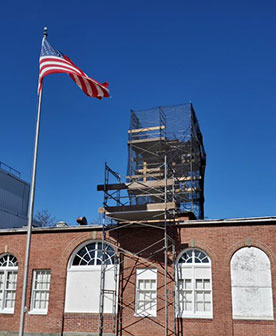 UPDATE: Chimney and Wellhead restoration work is complete and was revealed during TSCW's Global Gala on October 30
The chimney and cupola restoration project was a journey full of unexpected discoveries and challenges. The chimney was in a critical state, but emergency renovations began in early 2020 were soon halted by the onset of COVID-19. When work resumed in June 2020 in accordance with safe-distancing guidelines, our expert restoration crew discovered an interesting feature built into the chimney: an arched brick opening in the base.

The opening was found at the base of the eastern chimney wall.  We are getting ready to explore the space and will use Tesla technology to help determine its purpose.  Experts in historic architecture and archaeology are teaming up with all of us to solve the mystery.

UPDATES:  New photos, videos, and materials will be posted on this page so you can follow the story.

Support Renovations
Become a Member
Volunteer
Revealed
Photos of the discovery in Tesla's chimney, intriguing new perspective on Tesla, update on the Wardenclyffe project, and more can be found in this "Portal to Wardenclyffe" video. Watch TSCW's presentation from the 2020 HOPE Conference, packed with details, visuals, and provocative discussion.
Support
Historic Progress
Watch Tesla's 1200-pound chimney wellhead being replaced to its original location circa 1901. Get a closeup look at historic renovation work to the chimney, roof, and cupola and hear facts and details from Wardenclyffe's historic architect, the restoration team, and TSCW's Executive Director.
Support
Renovation Highlights 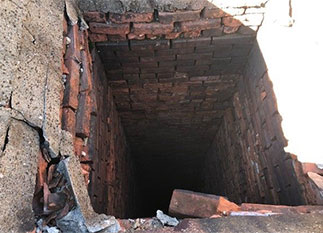 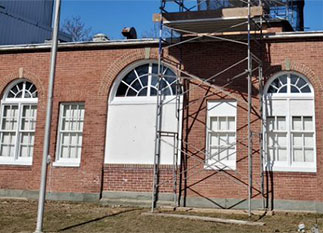 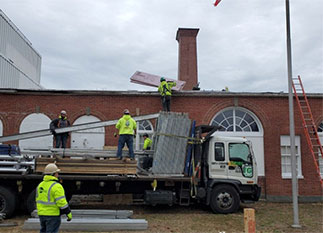 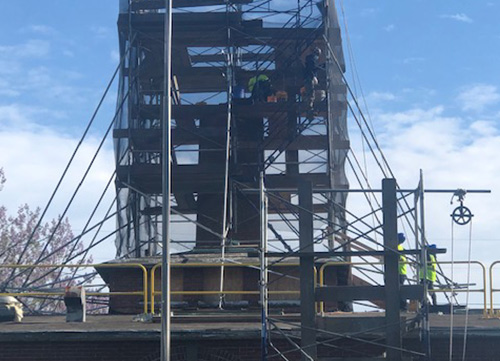 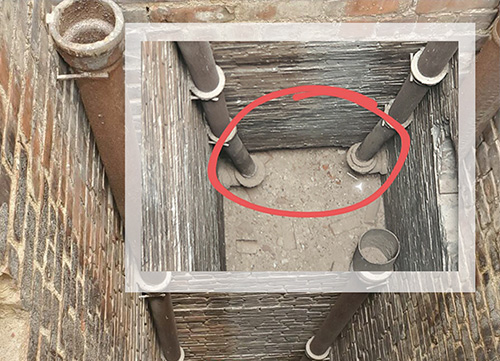 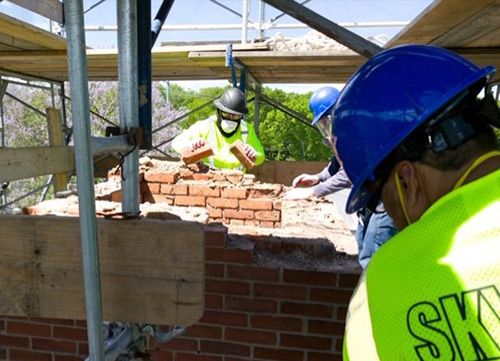 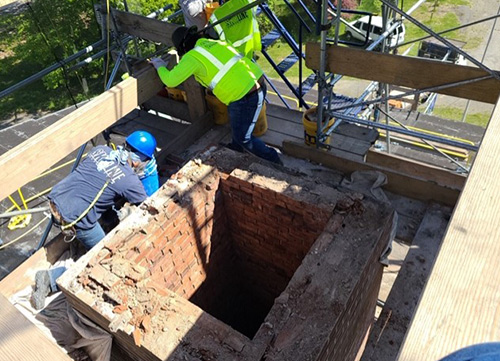 Explore TSCW's 2019 Annual Report where we reveal the details behind a remarkable year of growth. 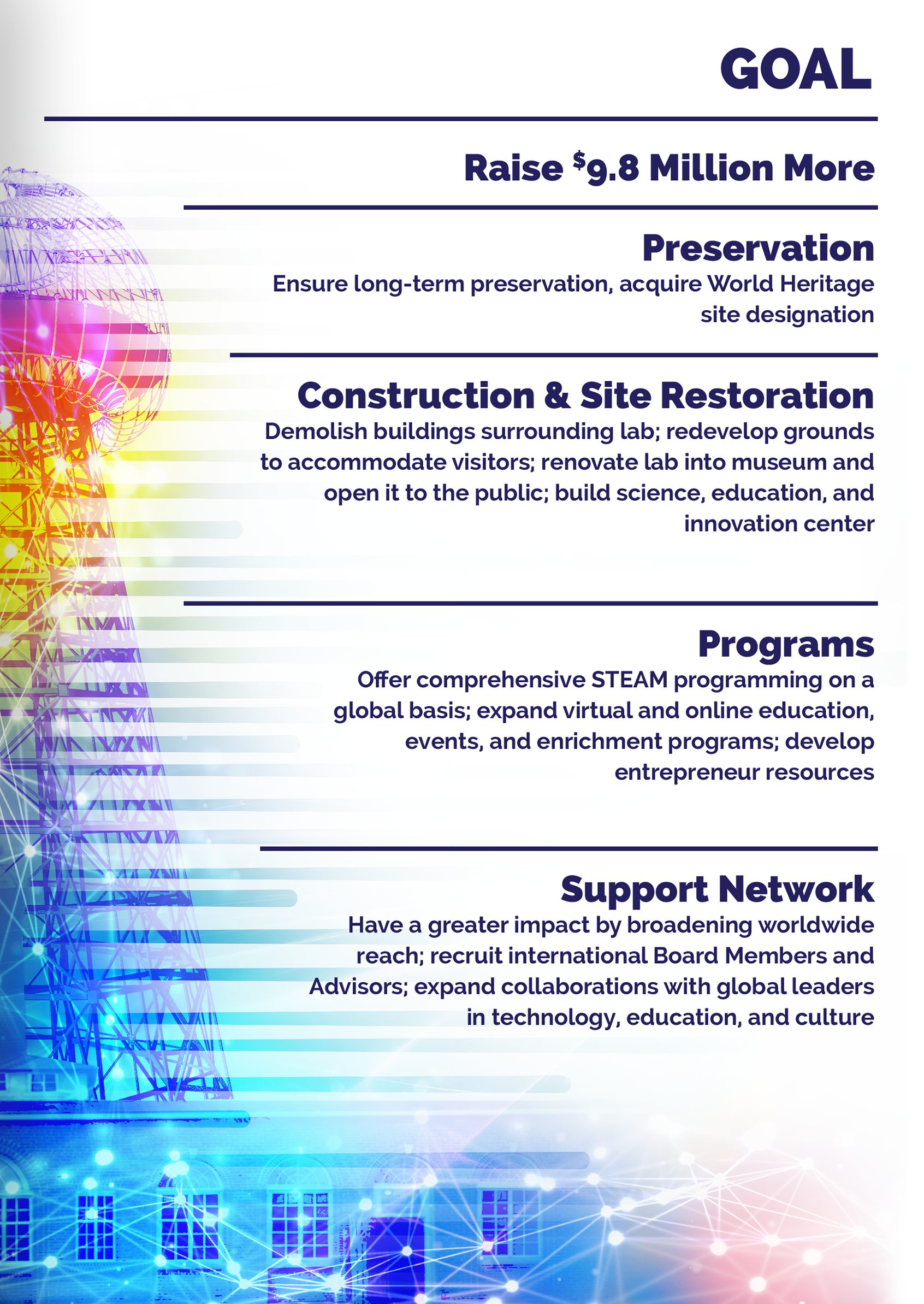 The world saved Wardenclyffe. Now it's time to build.

Nikola Tesla is one of history’s most influential inventors, yet his only laboratory was in danger of demolition until the world united in 2012 for a record-breaking crowdfund that raised $1.4 million in six weeks from 33,000 donors. All 50 US states and 108 countries were represented in this pivotal movement. Since then, we persevered with supporters to aquire the required plans, permits, and opertions and restoration of Tesla's historic lab began in 2020. Some of the world's foremost technologists, educators, and STEAM advocates are actively involved in having an impact on humanity through TSCW. We invite you to join us.

TSCW is now strategically positioned to begin Phase I of building a global science center with 3 key areas of impact on humanity:

Within the historic walls of Tesla’s laboratory, visitors will explore radically innovative and awe-inspiring exhibits. An interactive recreation of Tesla’s lab will illuminate the story of his world-changing inventions and how they impact humanity today and tomorrow. Futuristic technology will create an immersive experience that brings each person into the narrative to explore their own dreams and potential.

Technologists and entrepreneurs who transform the world through business are collaborating with us to build an accelerator of the future. A bold plan is moving forward to develop critical resources and funding for start-ups and entrepreneurs who are on the leading edge of technological advancement. Tools to achieve exponential business growth, mentorship programs with thought leaders, workspace, events, and other resources will be offered in an ever-evolving and relevant Accelerator Center.

TSCW is establishing an international science center dedicated to transformational learning and research. Global leaders in education and research are joining us to develop programs that go beyond standard STEAM to offer accelerated learning and transformative results. Educators, students, and researchers will have a virtual and physical space to converge for talks, experiential workshops, conferences, and events. Technology and innovation will continuously drive new levels of education, opportunity, and growth.

TSCW is a $20 million project:

$15 million is earmarked for the construction necessary to open the buildings to the public and $5 million to launch exhibits and programming. We raised approximately $10.2 million to date. Our goal is to raise $9.8 million more to ensure enough funding to open Tesla's historic lab as a world class museum with exhibits for an international public. You can help. Please consider donating or becoming a TSCW Sponsor. 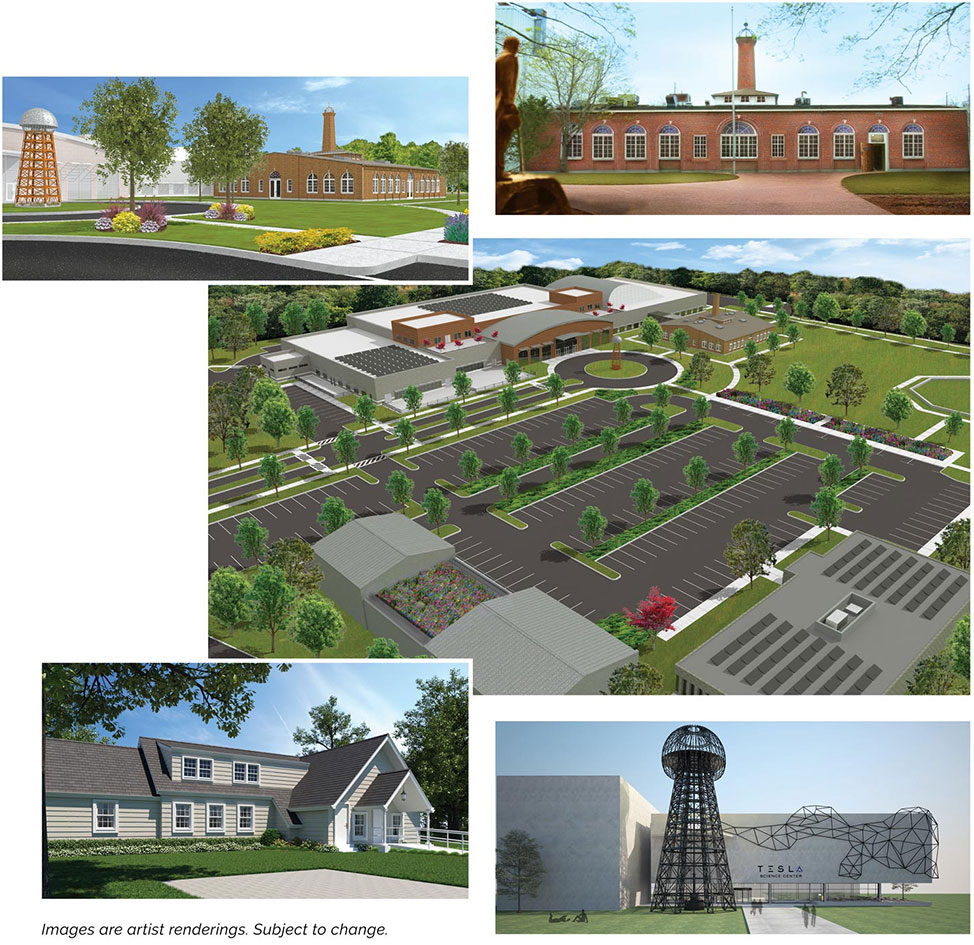 GET IN ON THE GROUND FLOOR