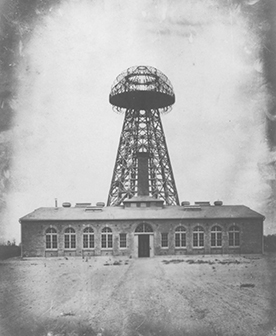 "When wireless is fully applied, the earth will be converted into a huge brain, capable of response in every one of its parts." – Nikola Tesla
A vision for global wireless energy & communication
Tesla's Tower at Wardenclyffe
A Dream Ahead of Its Time

By 1900, Tesla was already widely regarded as America’s foremost electrical engineer, having dazzled the world with his groundbreaking inventions and his triumph over Thomas Edison in the “battle of currents.”

It was then that he embarked on his most ambitious project to date: the transmission tower at Wardenclyffe. Constructed during the period of 1901-05, the Wardenclyffe facility was based on another of Tesla’s revolutionary ideas.

Tesla planned to use the tower to achieve what the scientific community had so far considered impossible: a global, wireless communication system. The tower would be the prototype for a system that could broadcast music, news, stock market reports, secured military communications, even facsimile images around the world, using the Earth itself as a conductor. It was an incredibly prescient attempt to create a telecommunications infrastructure similar to what the Internet offers us today—but completely wireless.

But Tesla had an even more ambitious purpose in mind for the massive Wardenclyffe tower. He had already proved that high-frequency signals could be transmitted without wired connections using his own “Tesla coil” transformers, and this led to what would become a lifelong obsession: the wireless transmission of energy.

Tesla’s dream was to not only revolutionize telecommunications by creating a system for relaying information wirelessly, but also to create a viable method for transferring power currents around the globe by capturing the Earth's natural energy. Tesla saw that the world around us is brimming with “free” energy, and was adamant about finding a way to harness it for the betterment of humanity. Secret experiments Tesla conducted at his Colorado Springs laboratory in 1899 had convinced him that it would be possible to transmit electrical power through the Earth’s upper atmosphere. Wardenclyffe was to be the prototype station for what he imagined as a grid of towers spanning the globe, realizing his dream of worldwide wireless power.

Tesla’s grand vision for Wardenclyffe exceeded his resources and his patrons’ patience. The project ran into financial difficulties before it was completed, and in 1917 the unfinished tower was finally demolished for scrap to satisfy Tesla’s debts. What had been a landmark laboratory full of fabulous Tesla inventions has now become a vacant testament to his most ambitious idea.

The original red brick laboratory building still stands, and is the only surviving Tesla lab today.

In 2017, a film crew successfully used ground-penetrating radar to confirm the existence of a series of long-rumored tunnels stretching for hundreds of feet underneath the Wardenclyffe facility. The original purpose of these tunnels remains a mystery to this day.

Today, the site remains a landmark and a pilgrimage destination for Tesla enthusiasts around the world. A grassroots campaign succeeded in saving the site in 2013, and the property is now owned by the Tesla Science Center at Wardenclyffe, a non-profit organization established to restore the site and ultimately develop a science and technology center and museum on the grounds. In 2018, the property was listed on the National Register of Historic Places. The laboratory can still be seen on the north side of Route 25A between the intersection of Randall Road and the Fire Department in Shoreham, Long Island in New York.

Next Up: The Architect: Stanford White →