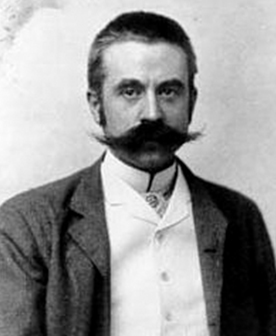 Stanford White was an important architect of the “American Renaissance” and one of the founders of the influential architectural firm of McKim, Mead, and White in 1880. White’s talent for lavish Italian Renaissance style, and what has come to be known as Shingle style, helped establish them as one of the best-known firms of the late 19th and early 20th centuries.

According to legend, White and Tesla had a chance meeting one night at the Players Club on New York’s Gramercy Park. White was thrilled to meet Tesla, whose plan for a world broadcasting system had recently been extensively covered in Century magazine.

During their conversation, Tesla explained his needs for the structure of the laboratory and tower and White, intrigued, gladly offered to create the design. Over the following months he corresponded regularly with Tesla on the specifications.

Either in collaboration with his partners or alone, White designed a wide variety of public, institutional, and religious buildings, including Washington Square Arch (1889), the first Madison Square Garden (1890), the Vanderbilt family residence (1905), and the New York Herald Building (1894). Of these, only Washington Square Arch still stands.

Next Up: The Journey: Saving Tesla’s Last Laboratory →