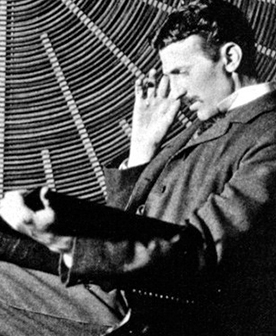 Construction of the Wardenclyffe facility began in 1901 and was based on one of Tesla’s most revolutionary ideas: a global, wireless system for communication and power transfer. Consisting of a brick laboratory building and a 187-foot wooden tower, the site was a testament to Tesla’s grand vision.

Tesla described his sensational plans for the tower in an article:

"As soon as completed, it will be possible for a business man in New York to dictate instructions, and have them instantly appear in type at his office in London or elsewhere. He will be able to call up, from his desk, and talk to any telephone subscriber on the globe, without any change whatever in the existing equipment. An inexpensive instrument, not bigger than a watch, will enable its bearer to hear anywhere, on sea or land, music or song, the speech of a political leader, the address of an eminent man of science, or the sermon of an eloquent clergyman, delivered in some other place, however distant. In the same manner any picture, character, drawing, or print can be transferred from one to another place. Millions of such instruments can be operated from but one plant of this kind. More important than all of this, however, will be the transmission of power, without wires, which will be shown on a scale large enough to carry conviction."

The Tesla Science Center at Wardenclyffe is a non-profit organization founded to restore the historic Wardenclyffe site and open a Tesla museum and science center. Use the mini navigation at the top or bottom of this page to discover more about our mission, our progress to date, and the history of Wardenclyffe.

Next Up: The Tower: A Brief History of Wardenclyffe →