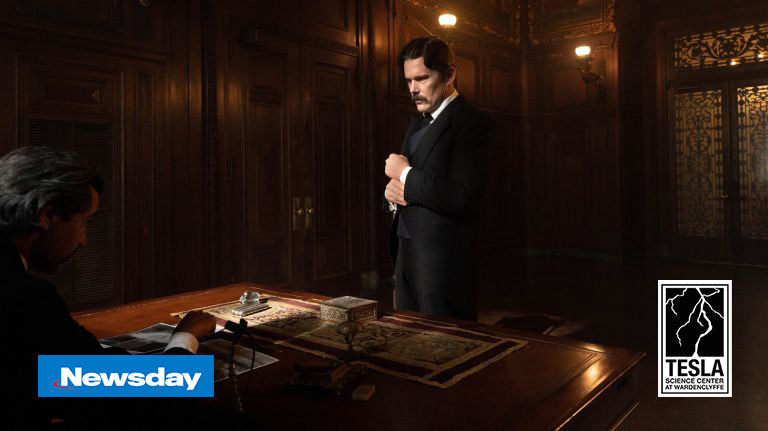 Before he sailed to the New World, Christopher Columbus reportedly silenced his critics by issuing them a challenge: to stand an egg on its tip. After their attempts failed, Columbus took the egg and gently crushed its tip — thereby enabling it to stand. Whether the story is true or apocryphal, the “Egg of Columbus” has become shorthand for any creative solution to a seemingly unsolvable problem.

Some 400 years later, at the 1893 Chicago World’s Fair, inventor Nikola Tesla  unveiled his own Egg of Columbus: an oversized copper egg resting on a wooden platform atop four electromagnetic coils. Switched on, the device created a magnetic field that caused the egg to spin on its major axis — a whole new answer to the old puzzle.

You can see a replica of Tesla’s Egg of Columbus in Michael Almereyda’s new biopic “Tesla,” starring Ethan Hawke in the title role. It’s not a prop; Almereyda borrowed it from the Tesla Science Center, the under-construction museum in Shoreham that once served as Tesla’s laboratory. The movie’s theatrical release date is Aug. 21, but it will screen fully six weeks early in a sneak preview at a pop-up drive-in at the Tesla Science Center on Saturday. Musical entertainment and a demonstration of wireless electricity will precede the screening; a live, remote Q&A with Almereyda, Hawke and co-star Kyle MacLachlan, who plays Thomas Edison, will follow. There will also be 250 tickets sold for at-home screenings.

“We think this is kind of a historical event,” says Marc Alessi, executive director of the Tesla Science Center. “We’ll have people with us physically but also virtually.”

For Almereyda, “Tesla” is the culmination of a nearly 40-year dream. As a teenager, Almereyda became fascinated by Nikola Tesla, an ethnic Serb born in 1856 in what was then the Austrian Empire. A brilliant if erratic inventor, Tesla moved to the United States in 1884 and became an important figure in the emerging electric-power industry, working for both Edison and his rival, George Westinghouse. In 1901, he raised money to build the Long Island lab known as Wardenclyffe, where he constructed a tower for wireless communication and power transmission. That dream never came to fruition, and the project ground to a halt within a few years. Tesla died in a room in the New Yorker Hotel in 1943.

“He made things possible. He’s responsible for scientific break-throughs that were breathtaking and mind-bending,” says Almereyda. “As I studied and thought about him, it seemed obvious that somebody could make a great movie out of this material.”

Almereyda began working on a script, which in 1982 was optioned as a project for the Polish director Jerzy Skolimowksi (“Deep End,” “Moonlighting”). Financing never materialized, but the near-miss convinced Almereyda to drop out of Harvard and pursue a filmmaking career that would eventually include 2000’s acclaimed “Hamlet” (featuring both Hawke and MacLachlan) and 2017’s sci-fi drama “Marjorie Prime” (starring Jon Hamm). During the making of that film, producer Uri Singer asked Almereyda if he had any unproduced scripts lying around. Suddenly, “Tesla” was back on the front burner.

What changed? Almereyda points to Tesla Inc., the forward-looking car company run by Elon Musk. “I don’t think you can underestimate the impact of Musk’s company on our current frame of mind on energy and entrepreneurs and tech geniuses,” Almereyda says. “There’s also many science-fiction novels and literary novels that project Tesla as a compelling figure. It is in the air. Tesla has become a popular icon.”

For the Science Center, the “Tesla” screening is a way to raise its profile at a crucial moment. Launched with a crowdfunding campaign in 2012 (which drew $1.4 million, some of it from Musk) and currently under construction, the Science Center had plans to open by the end of this year, according to Alessi. The Covid-19 pandemic put those plans on halt.

“Drawing attention to this site helps us to raise funds and open the site that much quicker,” Alessi says. “We think is going to be a gem not only for Long Island. We see this as a global center for Nikola Tesla.”