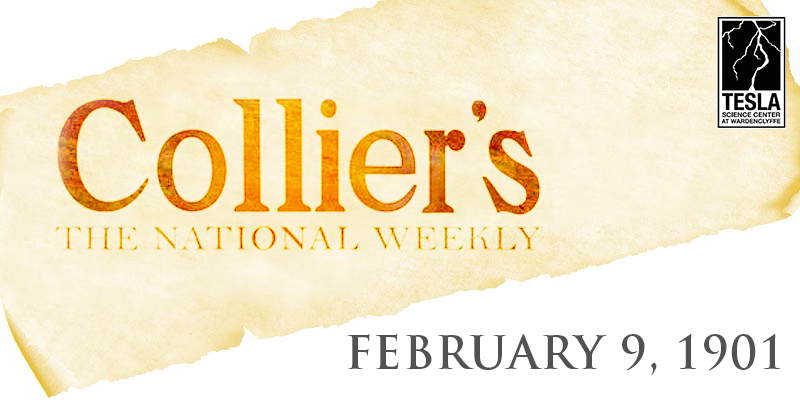 As published in Collier’s Weekly on February 9th, 1901, Nikola Tesla presented what he expects to accomplish and how he hopes to establish communication with the planets.

EDITOR’S NOTE. – Mr. Nikola Tesla has accomplished some marvelous results in electrical discoveries. Now, with the dawn of the new century, he announces an achievement which will amaze the entire universe, and which eclipses the wildest dream of the most visionary scientist. He has received communication, he asserts, from out the great void of space: a call from the inhabitants of Mars, or Venus, or some other sister planet! And, furthermore, noted scientists like Sir Norman Lockyer are disposed to agree with Mr. Tesla in his startling deductions.

Mr. Tesla has not only discovered many important principles, but most of his inventions are in practical use: notably in the harnessing of the Titanic forces of Niagara Falls, and the discovery of a new light by means of a vacuum tube. He has, he declares, solved the problem of telegraphing without wires or artificial conductors of any sort, using the earth as his medium. By means of this principle he expects to be able to send messages under the ocean, and to any distance on the earth’s surface. Interplanetary communication has interested him for years, and he sees no reason why we should not soon be within talking distance of Mars or of all worlds in the solar system that may be tenanted by intelligent beings.

At the request of COLLIER’S WEEKLY, Mr. Tesla presents herewith a frank statement of what he expects to accomplish and how he hopes to establish communication with the planets.

THE IDEA of communicating with the inhabitants of other worlds is an old one. But for ages it has been regarded merely as a poet’s dream, forever unrealizable. And with the invention and perfection of the telescope and the ever-widening knowledge of the heavens, its hold upon our imaginations has been increased, and the scientific achievements during the latter part of the nineteenth century, together with the development of the tendency toward the nature ideal of Goethe, have intensified it to such a degree that it seems as if it were destined to become the dominating idea of the century that has just begun. The desire to know something of our neighbors in the immense depths of space does not spring from idle curiosity nor from thirst for knowledge, but from a deeper cause, and it is a feeling firmly rooted in the heart of every human being capable of thinking at all.

Whence, then, does it come? Who knows? Who can assign limits to the subtlety of nature’s influences? Perhaps, if we could clearly perceive all the intricate mechanism of the glorious spectacle that is continually unfolding before us, and could, also, trace this desire to its distant origin, we might find it in the sorrowful vibrations of the earth which began when it parted from its celestial parent.

But in this age of reason it is not astonishing to find persons who scoff at the very thought of effecting communication with a planet. First of all, the argument is made that there is only a small probability of other planets being inhabited at all. This argument has never appealed to me. In the solar system, there seem to be only two planets–Venus and Mars–capable of sustaining life such as ours: but this does not mean that there might not be on all of them some other forms of life. Chemical processes may be maintained without the aid of oxygen, and it is still a question whether chemical processes are absolutely necessary for the sustenance of organized beings. My idea is that the development of life must lead to forms of existence that will be possible without nourishment and which will not be shackled by consequent limitations. Why should a living being not be able to obtain all the energy it needs for the performance of its life functions from the environment, instead of through consumption of food, and transforming, by a complicated process, the energy of chemical combinations into life-sustaining energy?

If there were such beings on one of the planets we should know next to nothing about them. Nor is it necessary to go so far in our assumptions, for we can readily conceive that, in the same degree as the atmosphere diminishes in density, moisture disappears and the planet freezes up, organic life might also undergo corresponding modifications, leading finally to forms which, according to our present ideas of life, are impossible. I will readily admit, of course, that if there should be a sudden catastrophe of any kind all life processes might be arrested; but if the change, no matter how great, should be gradual, and occupied ages, so that the ultimate results could be intelligently foreseen, I cannot but think that reasoning beings would still find means of existence. They would adapt themselves to their constantly changing environment. So I think it quite possible that in a frozen planet, such as our moon is supposed to be, intelligent beings may still dwell, in its interior, if not on its surface.