The Current War “Battle of the Quotes” 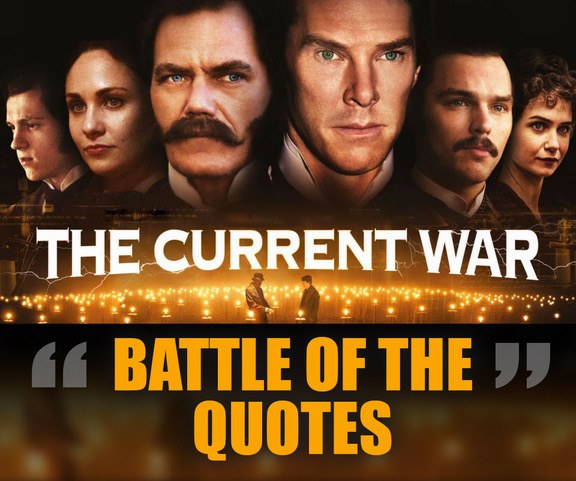 Announcing the results of Tesla Science Center at Wardenclyffe’s “The Current War Battle of the Quotes”! In the late 1800s, some of the world’s greatest minds were in a race to harness the power of electricity for use by humankind. Three of them took the lead and became key contenders in the historic Battle of the Currents: Nikola Tesla, George Westinghouse, and Thomas Edison. All three were brilliant men known for their vision, inventiveness, and opinions. TSCW conducted a survey where participants voted on quotes from Tesla, Edison, and Westinghouse in four categories: Most Prophetic Quote, Most Ironic, Most Humanitarian, and Most Inspirational. Thanks to all who took part in the survey and we hope you enjoyed the thought-provoking exercise. Here are the results…

Most Prophetic Quote: Which quote do you think is the most futuristic and shows the most vision and foresight?

1) “The day is near at hand when the doctor will no longer be engaged to patch up the sick man, but to prevent him from getting sick. He will visit families, examine the premises, inspect factories and shops, and give instruction to his patients how to keep from getting sick. Each family will select its doctor and pay him so much a year per capita. The doctors will not lose by the arrangement, either.” –Thomas Edison, 1908

2) “The practical applications of the revolutionary principles of the wireless art have only begun. What will be accomplished in the future baffles one’s comprehension. It will soon be possible, for instance, for a business man in New York to dictate instructions and have them appear in type in London or elsewhere. He will be able to call from his desk and talk with any telephone subscriber in the world. It will only be necessary to carry an inexpensive instrument no bigger than a watch, which will enable its bearer to hear anywhere on sea or land for distances of thousands of miles.” –Nikola Tesla, 1909

3) “If someday they say of me that in my work I have contributed something to the welfare and happiness of my fellow man, I shall be satisfied.” –George Westinghouse, 1884

Results for the Most Prophetic Quote:

Most Ironic Quote: Of the quotes below, which one do you consider the most ironic, in light of how history unfolded?

1) “They could have done it better with an ax.” –George Westinghouse (Regarding the botched execution of a prisoner using alternating current, an unfortunate situation that Edison used to promote AC as dangerous in comparison to DC.)

2) “Non-violence leads to the highest ethics, which is the goal of all evolution. Until we stop harming all other living beings, we are still savages.” –Thomas Edison (Edison electrocuted animals as part of a public relations campaign to discredit Tesla’s alternating current system for generating electricity.)

3) “Let the future tell the truth, and evaluate each one according to his work and accomplishments. The present is theirs; the future, for which I have really worked, is mine.” –Nikola Tesla (In response to Marconi receiving credit for inventing radio, despite using 17 of Tesla’s patents to develop radio technology for commercial use.)

Results for the Most Ironic Quote:

Most Humanitarian Quote: Which quote below do you believe shows the most concern for human welfare and the betterment of humanity?

1) “The desire that guides me in all I do is the desire to harness the forces of nature to the service of mankind.” –Nikola Tesla

3) “If you want to be remembered, it’s simple, shoot a president. But if you prefer to have what I call a legacy, you leave the world a better place than you found it.” –George Westinghouse

Results for the Most Humanitarian Quote

Most Inspirational Quote: Select the quote that most inspires and motivates you.

2) “The alternating current will kill people, of course. So will gunpowder, and dynamite, and whisky, and lots of other things; but we have a system whereby the deadly electricity of the alternating current can do no harm unless a man is fool enough to swallow a whole dynamo.” –George Westinghouse

Vote for the Most Inspirational Quote

<< Back to Announcements
An Interactive Journey of 2019 with News and Motivation for 2020
Thanks to all who made 2019 a year of extraordinary
Read More
“Talking With The Planets” – Collier’s Weekly, February 9, 1901
As published in Collier’s Weekly on February 9th, 1901, Nikola
Read More
Inventor Tesla’s Plant Nearing Completion
As published in Brooklyn Daily Eagle on February 9, 1902
Read More
Long Island’s diverse history emerges through Robert David Lion Gardiner Foundation grant to Tesla Science Center at Wardenclyffe
Shoreham, NY, January 21, 2020 — Tesla Science Center at
Read More