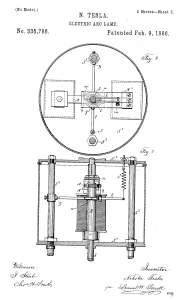 In December 1884, Tesla leaves his position with Thomas Edison due to a disagreement with the company over financial compensation for his work.  He immediately forms a partnership with Benjamin Vale and Robert Lane to manufacture arc lighting that is named Tesla Electric Light and Manufacturing; the company operates in Rahway, NJ, from December 1884 to 1886.  During this time, Tesla receives patents for improved arc lamp designs that implement an automatic adjustment and a fail switch, as well as patents for a dynamo commutator and dynamo regulators. Unfortunately, the company shuts down in the fall of 1886 when Tesla’s partners form a new firm called Union Electric Light & Manufacturing Company, leaving Tesla with nothing but worthless stock.

Tesla briefly describes the experience in his autobiography.

“Immediately thereafter some people approached me with the proposal of forming an arc light company under my name, to which I agreed. Here finally was an opportunity to develop the motor, but when I broached the subject to my new associates they said: ‘No, we want the arc lamp. We don’t care for this alternating current of yours.’ In 1886 my system of arc lighting was perfected and adopted for factory and municipal lighting, and I was free, but with no other possession than a beautifully engraved certificate of stock of hypothetical value.”

Explore the inventor's most influential moments and discoveries using our interactive Tesla Timeline.

Nikola Milutinov Tesla was born in the small village of Smiljan in what is modern-day Croatia.
Childhood Inventions
1860
1860

Young Nikola's education and interests have great impact on his later inventions.
Cholera & A New Path
1873
1873

After graduating from high school in 1873, Nikola contracts cholera and makes a life-changing choice.
College Years
1875
1875

Tesla's breakthrough moment was a walk in the park (literally) that changed history...
Career Beginnings
1882
1882

Tesla's skill and ingenuity lead to recognition and opportunities, including a life-changing course to America.
Arrives in America
1884
1884

Tesla's new life in the USA is a tale of the young inventor's trials and triumphs.
Tesla Electric Light & Manufacturing
1885
1885

On this day in 1886, Nikola Tesla was awarded his very first US patent for a Commutator for Dynamo Electric Machines.
Egg of Columbus
1887
1887

Tesla's ingenious idea for gaining support of the induction motor.
Year of Discovery
1890
1890

The infamous "Battle of the Currents" between Tesla and Edison comes to a head at the 1893 Chicago World Fair.
Colorado Springs
1899
1899

Tesla's experiments with high voltage and high frequency in the Colorado mountains .
Vision of the Future
1904
1904

Vision of the Future

HOVER OVER ANY OF THE DATES TO READ MORE